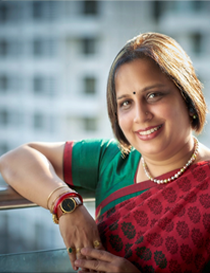 Based on my experience in the Corporate World in India & Overseas, here are some points to ponder for Women.

The world is far from perfect! There are bound to be challenges & injustice.

I strongly believe that we ourselves are responsible for the way we get treated. If you feel weak/strong, portray yourself weak/strong, that is how you will be perceived too & responses/actions/reactions would follow in a similar manner.

The way you dress, speak, choice of words, body language….all form an impression. Hence, utmost care must be taken to be a professional at all times. Any signs of self doubts are easily picked up. Greed, need or wanting or giving favours are the key to attracting unwanted attention. You must be clear about what is the acceptable trade off for you & what is non-negotiable.

One must draw clear boundaries & make those known too. Being sure of oneself, having a strong character & living by values is the best way to co-exist with men in the corporate ecosystem.

In today’s times, acquiring self defence techniques will ensure your own safety in case of need.

Felicitated with the "MTC Global Outstanding Corporate Award for Excellence in Human Resources” during the 6th Annual Global Convention –SANKALP 2016, “Women Achievers Award" by World HRD Congress & Institute of Public Enterprise in 2013, “HR Super Achiever Award” by Star News at the 20th World HRD Congress 2012 amongst many others, Aparna is a passionate learner in her journey of over 20 years of intense and expansive HR work. In her diverse roles, Aparna has successfully been a learning partner, mentor and coach to leaders, leadership teams and organisations to build competencies, learning abilities and nimbleness for achieving purposeful performance.

After completing her post graduation in Personnel Management & Industrial Relations (PM & IR) from Tata Institute of Social Sciences (TISS), Mumbai, Aparna made her foray into the corporate world through Nocil and moved into different roles in the HR function in organisations like Monsanto, Novartis, UCB, Deutsche Bank, Lafarge & Greaves Cotton. Over the years, Aparna has learnt to persistently and passionately value freedom, authentic relationships and realization of potential of people.

Winner of many accolades like ‘Women Leadership Award’ for BFSI (Banking, Financial Services & Insurance) Awards by Institute of Public Enterprise (IPE), Hyderabad, ‘Achiever of Excellence Award’ by Bombay Management Association (BMA) & Indian Society for Training & Development (ISTD, Mumbai), she is reckoned as one of the top women HR Leaders in the country & quoted as a Thought Leader in HR. Under her leadership at Lafarge, many in-company Global Awards such as ‘Digilearn Championship Trophy’ & ‘WAVE’ (Women Adding Value & Excellence) have been received besides external recognitions like CLO (Chief Learning Officer’s) Award consecutively for 3 years.

Beyond her corporate role as an HR Leader, Aparna also dons the hat of HR contributor through her associations with Indian Society of Training & Development (ISTD), All India Management Association (AIMA), National Institute of Personnel Management (NIPM), National HRD Network, and Sumedhas, where she actively participates in disseminating her acquired knowledge and build the HR fraternity by creating future leaders. She was the Honorary Treasurer of National HRD Network, Mumbai Chapter (2012-2015) and a member of the Executive Committee. She was also elected as member of the National Executive Board of NHRDN for the period 2013-2015. Currently, she is an Independent Director on the Board of T.S Alloys Ltd.(100% subsidiary of Tata Steel).

A wildlife enthusiast and an amateur photographer, Aparna spends most of her leisure time closer to nature. Aparna also loves travelling as it gives her an opportunity to meet new people.  Books are Aparna’s favourite ally and she dedicates every day some time to read something new. An avid reader, she has a collection of some of the best books of the century.

She launched her maiden book in 2015, “Reality Bytes-The Role of HR in Today’s World” which has received wide acclaim. The book has also been translated in Hindi & is being launched across the country.