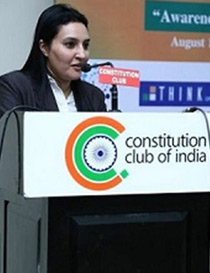 During the survey we observed that women employees were­­ deprived of career opportunities purely because of their gender, marital status or plans of starting a family.

Many of our survey respondents shared a situation wherein superior was biased and often engaged in practices of removing women team members from key projects without having any justifiable reasons.

In few cases, organizations  discounted them on salary, role and designation while returning from career breaks (majorly from maternity or caregiving)

It is important to understand the

I would start with a quote from Dr. Justice A.S. Anand

The preamble of constitution promises to secure to all its citizens- “Justice- economical, social, and political”. The constitution declares that the equality before the law and the equal protection of laws shall be available for all . Similarly, there shall be no discrimination against any citizen on the ground of sex . Article 15(1) guarantees equalities of opportunities for all citizens in matters of employment. Article 15(3) provides that the state can make any special provisions for women and children. Besides, directive principle of state policy which concern women directly and have a special bearing on their status directly and have a special bearing on their status include Article 39(a) right to an adequate means of livelihood; (d) equal pay for equal wok both men and women, (e) protection of health and strength of workers –men, women, children and Article 42 provides for just and humane conditions of work and maternity relief.
The Equal Remuneration Act, 1976 (ERA) addresses employee discrimination issues with respect to recruitment, wages, work transfers and promotion. It provides for payment of equal remuneration to men and women workers, for same work or work of similar nature and for the prevention of discrimination against women in the matters of employment. Taking up the recruitment process, section 5 of the ERA prohibits the employer from devising a hiring process that puts women at a disadvantage on account of their gender. This is specifically in reference to work that is the same or similar to that which is offered to men and even in respect of transfers and promotions. The ERA also discourages the reduction of wages on purpose in order to fulfil the condition of equal remuneration.

Hence, our legal framework does provide protection against gender discrimination through various legislations. When faced with a scenario of discrimination the women employee should make a written complaint to the company officials and seek immediate inquiry and relief. Most of the organizations these days have anti-discrimination, anti-Bullying / Harassment and anti-retaliation policies to address such issues.

In case , the organization does not initiate any inquiry or does not provide relief, then one should either reach out the labour office and make a complaint in writing. One may engage an NGO or Legal Practitioner to file a formal case under available labor laws and constitution rights. At Kanchan Khatana and Associates, we have supported over 300 women employees in last 8 months to attain justice in similar matters.

So what is the most viable way and legally sound way of handling Sexual Harassment?

Unfortunately, women’s rights and well-being is under threat all the time, either within the family or outside its confines. Despite extensive work done by the civil society, organizations to create safe spaces for women, freedom from violence, personal, economic and political security but a few of the basic human rights yet to be enjoyed by many women worldwide.

With the increasing workforce the vulnerability of women have also increased. They are now not only facing harassment within the confines of their homes but also on roads and in their work place. One such harassment is Sexual Harassment, which is oldest and the most common form of harassment that touches the life of every woman irrespective of age, race, religion, income, class and culture.

As Sexual Harassment is all about power play, the very act puts the women in an inferior position and continues to hold her there. Some women deal with Sexual Harassment strictly, however there are a large multitude who continues to suffer and try to protect their dignity for fear of discrimination, hostility ridicule and stigma. It is my humble appeal to all to confront such behavior the moment you experience. Avoidance is not an option to be exercised. Indian legal system has provided for various legislation to safeguard women’s interest and provide justice.

According to the Protection of Human Right Act, 1993 “human rights” means the rights relating to life, liberty, equality and dignity of the individual guaranteed by the Constitution or embodied in the International Covenants and enforceable by courts in India. Women rights are also Human rights and need to be protected ,so that they are allowed to live with dignity without fear of their safety and security.

Sexual Harassment of a woman employee at workplace, tantamount to violation of the ‘right to gender equality’ and also the ‘right to life and liberty’- the two most precious fundamental rights guaranteed in the Constitution of India under articles 14, 19 and 21.

The UN Convention of the Elimination of all forms of Discrimination against women (CEDAW) adopted in 1979 at Beijing to which India is also a signatory recognizes and also acknowledged that Sexual Harassment is a serious malady and has categorized it as gender discrimination and a form of gender based violence. In its general recommendation No 19 ,the committee has called the” State parties to include in its reports information on Sexual harassment and on measures to protect women from sexual harassment and other forms of violence or coercion at the workplace”.

The Supreme Court judgment of 1997 makes it obligatory for every employer and other responsible persons to follow the guidelines laid down by the Court and to develop a specific policy to prevent and address the issue of sexual harassment at the workplace.

In 2013, the Government of India notified the Sexual Harassment of Women at Workplace (Prevention, Prohibition and Redressal) Act (referred to as Act hereinafter). Consistent with the Vishaka judgment, the Act aspires to ensure women’s right to workplace equality, free from sexual harassment.

In case , the organization/ ICC does not initiate any inquiry or does not provide relief, then one should either reach out the Labour office or You may engage an NGO or Legal Practitioner to file a formal case under available labor laws and constitution rights. At Kanchan Khatana and Associates, we have supported over 600 women employees in last 12 months to attain justice in similar matters.

In case , number of employees in your organization are less than 10 . You must approach the District Officer who will ensure that District LCC reviews your complaint and provides you with appropriate relief.

Experience and for that reason held “We therefore prefer to analyze harassment from the [Complainant’s] perspective. A complete understanding of the [complainant’s] view requires… an analysis of the different perspectives of men and women. Conduct that many men consider unobjectionable may offend many women… Men tend to view some forms of sexual harassment as “harmless social interactions to which only overly-sensitive women would object. The Characteristically male view depicts sexual harassment as comparatively harmless amusement. … Men, who are rarely victims of sexual assault, may view sexual conduct in a vacuum without a full appreciation of the social setting or the underlying threat of violence that a woman mayperceive.”

I once read somewhere.

“Self respect by definition is a confidence and pride in knowing that your behaviour is both honorable and dignified. When you harass or vilify someone, you not only disrespect them, but yourself also.Street harassment, sexual violence, sexual harassment, gender-based violence and racism, are all acts committed by a person who in fact has no self respect.
-Respect yourself by respecting others.”

Ms Khatana is founder of one of the fastest growing Law firm in country, ‘Kanchan Khatana and Associates’ and hold position of Vice Chair of Women Empowerment & Studies Section of Indian National Bar Association

Ms. Khatana a seasoned legal professional and Social Activist. She carries over 16 years of extensive experience in steering matters across Employment Law, Corporate Law , Regulatory Compliance, Mergers and Acquisitions, strategic alliances and joint ventures for many Multinational corporations across countries like India , China , Hong Kong ,Japan , Australia ,Philippines, Korea and Singapore. Enriched by education from leading Law and Management institute, Ms. Khatana has played a vital role in transforming many organizations into one of the nation’s fastest growing companies.

She has been working extensively in the field of Human rights, Rights for women and various other victims of discrimination and injustice. She is on Advisory board of many NGO's and industry Association.
client@wisitech.com
We have written to your personal email address, please respond to that so we can support, and don't worry, this issue can be managed.
Confidential
Dear Mam I am in a situation where I cant leave job and even cannot go back to my native as kid are studying here in Delhi. I am being badly harassed subtly FOR LAST 2 YEARS and removed me from my position without any justified reason and placed a person above me (happended to be friend of key offender) for the department which I was heading. They have completely side silned me, violates protocol and what not and dragging me to leave the company. I have complete 10years in this company. I have given a whistle blower and committee was formed to investigate but one of the investigator and influential member played a trics with the key offender and my evidences are not taken into consideration and further have made me accussed but no explanation is given. It has been taken negatively as retailiation as most of points in my disclosure indicates the HR lapses with investigator him self is heading. The out come of investigation was in the form of new organisation structure and removed completely from my core area of job. Our management is Japanese and they go by what these guys tell them and treat me with prescipted scripts of theirs. I have no job role after several request & often divert me to the junior consent for my job role and they unitedly donot want me to stay in the company. They have stooped my incretements . I WAS WELL TO DO but now I am in a position to sell out my booked house & cannot pay EMI. I have grown from graasroot level with in the limited qualification and not getting any job because of low qualification. But Here in this company I am one of the founder member and established the tech service department I am in AGM rank and was an operation leader for all india. But now no clue what should I do. Please give a direction. Case is much worst than that what is mentioned above because of short of words. please ADVISE. REGARDS
HRhelpdesk
Dear Name Hidden, we have written to your personal email address. Hope to be able to assist you in your time of crises.
Name Hidden
I need your help to save me from harassment at my workplace at name hidden Renukoot in name hidden.