Ethics, Whistleblowers and the Impending Downturn 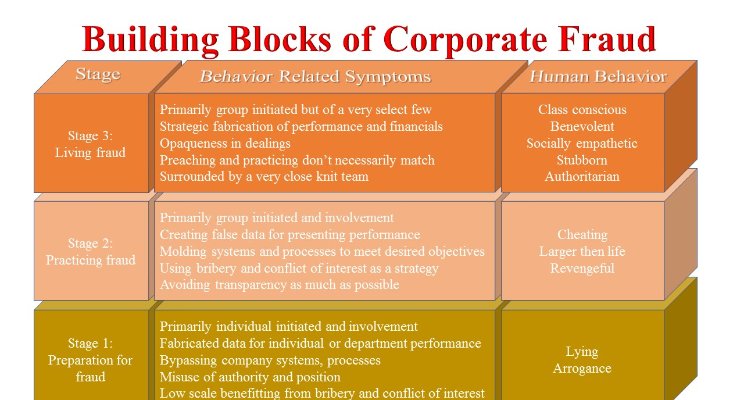 I am not a financial analyst, neither am I an oracle, however over the years I have read human behavior and worked in numerous roles to see how human behavior can be molded by organizations or groups to achieve pre-designed goals, which sometimes could be selfish. Which is why, I would like to call myself as a somewhat expert on understanding organization culture, given my exposure to understanding human behavior in the corporate context.

What I am going to be talking about in this article is, how ethics and whistleblowing are related and just do a little white-boarding on whether we are really staring at another financial downturn.

Apart from various factors that lead to a greed based recession or a downturn, one of the most important one is directly linked to human behavior, that is, of people not having the courage and sometimes the interest in reporting frauds. Frauds, which are small, insignificant as a single instance, but when studied in combination, create a whole linked up chain of an intertwining structure strong enough for impacting not only a nation’s economy but the world economy as a whole.

Having experienced fraud related downturns couple of times, many countries have put in place a lot of measures to avoid these in future,

however, an area which got little attention is the human behavior part of it.

Not to take away the credit, as someone did feel that it is essential to look into human behavior, and hence the whistleblower policies in various forms and shapes were launched. In most countries, they are mandated by law for both privately held and listed organizations.

The policy however, clearly depicts that in the heavy domination of strategists, financial planners and legal big-wigs, the human factor was given a meek audience and a mention.

The policies lacked one common point, and rarely will you find any policy framework providing an end to end protection not only from frauds, but symptoms of frauds.

Which is why I say, we are sitting on an impending downturn caused as a result of fraud, it is just a matter of time. It is not will it happen, it is when it will happen.

Common knowledge says that any big event, disease or even emotion will have a few symptoms being demonstrated before the actual outburst. So much so, that all the fraud control policies that have been designed have a lot of financial, legal and other measures already in place to capture the frauds by way of symptom readings, which companies may be trying to play with.

As I said earlier, the meek voice of human behavior point is forgotten in this entire cycle.

The symptoms which human behavior presents of an impending fraud are totally missing,

and it is human behavior which is the biggest give-away to any fraud or any evil intention. Every fraud is first executed in the mind of a human and then in actual sense.

So what are the symptoms of corporate fraud, let us understand that a little more 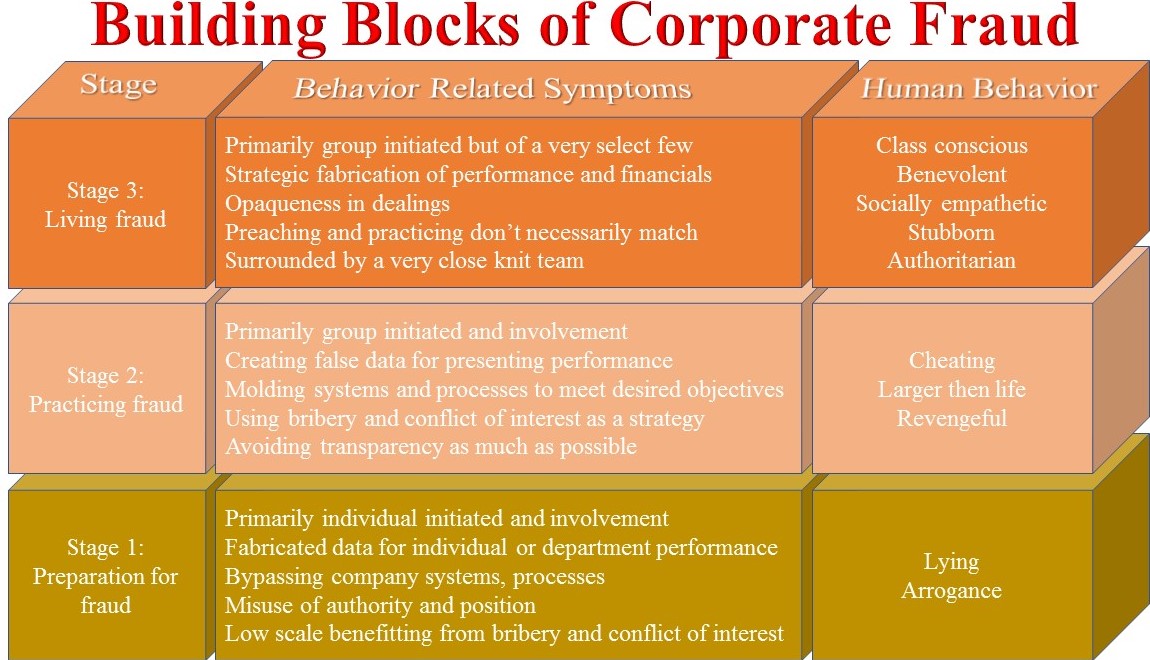 I present a belief that we as humans are a highly adaptable species. Time has proved this, unless we were, we wouldn’t have reached the top of the food chain and be ruling planet earth. With this philosophy, it is important to know that corporate frauds are not really a result of pre-designed motives like bank robbery.

People don’t join organizations with the intent of creating a fraud, they pick it up somewhere along the way, and in most cases, it is something that individuals adapt to either themselves or are trained by the companies that they join.

Trained by who, is something we can deliberate on later.

When someone joins an organization, they ideally operate in the space of normal deliverables, until they realize that the culture allows them and expects them to start experimenting with the stages of corporate fraud. Culture can be a result of small teams, or large teams or even a result of the company failing to catch and punish the wrong behaviors, it is not essential to have people doing the wrong things, the biggest failure is when as a company they fail to catch these behaviors and punish them, the ripple effect starts, which eventually leads to an avalanche.

It is stage 3 which would normally cause a financial crisis, and it is stage 2 where you have smaller instances, but noticeable ones, and can be caught by government authorities if they dig deeper into the output, like performance of the company, the financial statements, tax evasions and various other sorts which are not linked to an overall big game plan, but looking at benefiting an incident.

So, what is stage 1, and why is it the most important one. It is stage 1 which is predominantly linked to human behavior, let us for now call it organization culture.

Corporate fraud is done for various purposes, in the corporate world it is done to demonstrate ability to deliver on assigned targets or to create a situation for amassing wealth, there are various other reasons, but let us focus on these for now, as they form habits which result to frauds. Which is why it is very unlikely that anyone outside the company or a new employee can cause frauds.

The employee will observe others in stage 1, demonstrate it himself or herself, see how the company responds, and then take the step of moving to stage 2 and then to stage 3. Some move faster and some move slowly. During this entire process, they pick up accomplices, and then they move together from smaller to larger benefits, from smaller frauds to larger frauds.

Someone who is practicing fraud at stage 1 or stage 2, will be someone who falsely reports his or her performance data, they bypass company processes and systems and do believe in too much hiring and firing. Why, because, people who are not letting them fabricate the data or bypass company systems and processes are a bottleneck to attain their goals, hence they need to be moved out, smart fraudsters get such bottlenecks good roles or promotions in other parts of the company. The not so smart fraudsters start a process of exiting the employee by putting up false claims, whether they be related to performance, to attitude or discipline. The intent is clearly to remove bottlenecks and move forward.

It becomes very important for the leadership team and specially the CEO to have specific audits of the complaints systems that the company uses, the most important thing fraudsters in either of the stages will do is to ensure that policies are molded to benefit them.

Hence, it doesn’t matter whether there are whistleblower policies in existence or not, what matters is how many of these complaints were actually seen by the complainant as having been fairly dealt with and closed.

If this information is available with the CEO or the government agency responsible for preventing corporate fraud, you have got the human behavior in control, if you really dig little deeper, one will realize that majority of the people walking the fraud journey, would have had some complaint against them in the system, even if a minor one, and it was brushed aside. The so-called investigators have to be independent and have to have a written closure report from the complainant that will mention whether the issue is really closed and in a fair and just manner.

Unless the complainant has the option to report non-fairness of the process to the CEO and the government authority, it is a failed process, for it is here that the symptoms are reported and can be set right by the respective people.

Raising a concern through whistleblower policy is not the issue, what the company did and how they dealt with it, gives a clear message on whether they are contributing positively or negatively in causing another downturn caused by the greed of a few rightly placed ones.

Till such time, we as companies and countries don’t have a system put together to get hold of symptoms of human behavior that can result into corporate fraud, we are just working on Gods prayer to avoid another downturn and save loss to millions of people as some people enjoy with engineering systems and processes.

Stay in touch with the latest at HRhelpdesk®
Engage in a conversation with us, please email hrhelpdesk@hrhelpdesk.in